Bayonne is a city and commune and one of the two sub-prefectures of the department of Pyrénées-Atlantiques, in the Nouvelle-Aquitaine region of south-western France. It is located at the confluence of the Nive and Adour rivers in the northern part of the Basque Country, as well as the southern part of Gascony where the Aquitaine basin joins the Pre-Pyrenees. Together with nearby Anglet, Biarritz, Saint-Jean-de-Luz, and several smaller communes, Bayonne forms an urban area with 288,359 inhabitants, 45,855 of whom lived in the city of Bayonne proper.

The site on the left bank of the Nive and the Adour was occupied before ancient times as a fortified enclosure was attested in the 1st century at the time when the Tarbelli occupied the territory. Archaeological studies have confirmed the presence of a Roman castrum, a stronghold in Novempopulania at the end of the 4th century before the city was populated by the Vascones.

In 1023 Bayonne was the capital of Labourd and, in the 12th century, extended beyond the Nive. At that time the first bridge was built over the Adour. The city came under the domination of the English in 1152 through the marriage of Eleanor of Aquitaine: it became militarily and, above all, commercially important thanks to maritime trade. It was separated from the Viscount of Labourd in 1177 by Richard the Lionheart. In 1451 the city was taken by the Crown of France after the Hundred Years’ War. The loss of trade with the English and the silting up of the river as well as the movement of the city towards the north weakened it. The district of Saint-Esprit developed thanks to the arrival of a Jewish population fleeing the Spanish Inquisition. From this community Bayonne gained its reputation for chocolate. The course of the Adour River was changed in 1578 under the direction of

Louis de Foix and the river returned to its former mouth, returning business lost to Bayonne for over a hundred years. In the 17th century the city was fortified by Vauban. In 1814 Bayonne and its surroundings were the scene of fighting between the Napoleonic troops and the Spanish-Anglo-Portuguese coalition led by the Duke of Wellington: the city then underwent its final siege.

In 1951 the Lacq gas field was discovered whose extracted Sulphur and associated oil are shipped from the port of Bayonne. During the second half of the 20th century many housing estates were built forming new districts on the periphery and the city was extended to form a conurbation with Anglet and Biarritz: this agglomeration became the heart of a vast Basque-Landes urban area.

Bayonne is the heart of the urban area of Bayonne and of the Agglomeration Côte Basque-Adour which includes Anglet and Biarritz. It is an important part of the Basque Bayonne-San Sebastián Eurocity and it plays the role of economic capital of the Adour basin. Modern industry—metallurgy and chemicals are established to take advantage of procurement opportunities and sea shipments through the Harbour. Today it is now mostly business services which represent the largest source of employment. Bayonne is also a cultural capital, a city with strong Basque and Gascon influences and a rich historical past. Its heritage lies in its architecture, the diversity of collections in museums, its gastronomic specialties, and traditional events such as the famous Fêtes de Bayonne. 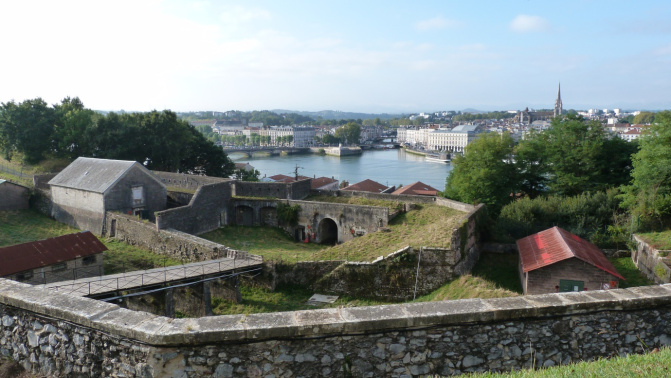 GUIDED TOUR OF BAYONNE
Bayonne travel through history from its beginning as a Roman military camp, to its importance as a commercial port during the middle ages and its geostrategic status during the wars between France and Spain. Visit its magnificent system of defensive walls, including the Roman one, enjoy the picturesque architecture, and see the stunning views of the ‘Nive’. Includes talk about the well-known features of Bayonne, the famous ‘Fetes de Bayonne’ and the delicious ‘Jambon de Bayonne’. Tour highlights: Bayonne’s Cathedral, The Old Castle (‘Chateaux Vieux’), The Roman defensive walls, Middle ages streets of Bayonne, the ‘Chocolate Street’ (‘Rue du Port Vieux’), ‘Nive’ Riverside, the square of the old medieval pillory (Place Pasteur), and much more.

TO RESERVE/BOOK
• Booking request must be made by email.
• Reserve/book your tour at babanglophonegroup@gmail.com.
• Booking deposit of 50% required to confirm any/each reservation.
• Remaining 50% payment required 60 days prior to departure of Tour.
• Payment via PayPal, or by direct bank transfer in certain circumstances.
• In the event Operator cancels tour, Operator’s liability is limited to refund of payment received.
• Operator will do its best to assist Customer with finding an alternative option.

When your spirit is weary, your discipline will relax

Synchronicity on the Journey